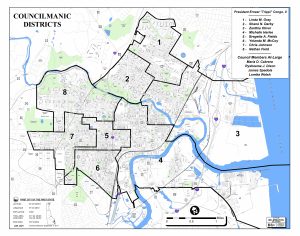 Every ten years, local governments use new census data to redraw their district lines to reflect how local populations have changed. The City of Wilmington will begin the process of redistricting its councilmanic districts on August 25, 2021. Per City Code/Charter, Sec. 2-32, the process sets forth the mandatory duty of the city council to redistrict the city into eight councilmanic districts within six months after the date of publication by the United States Census Bureau of the population of the city.  Because of the pandemic, the official population census numbers were delayed and scheduled to be disbursed on August 12, 2021, according to the U.S. Census Bureau’s website.

The City of Wilmington is divided into eight districts, each represented by one council member. Four at-large members represent the entire city.

• and President Ernest “Trippi” Congo will chair the committee.

The City Council Redistricting Committee is tasked with preparing a report that contains a recommended plan for adjusting the councilmanic district boundaries of districts one through eight to comply with the following specifications:

(1) Each district shall contain contiguous territories; and

(2) Each district shall contain as nearly as possible the same number of persons with no aggregate diversion in population more than ten percent from the average population for all districts, the average to be obtained by dividing the number eight into the total population of the city according to that federal decennial census so published.

To find a complete list of procedures the City Council Redistricting Committee must follow, visit the following link here.

Members of the public can attend the redistricting meetings either online, or in-person in Council Chambers located at the Louis L. Redding City/County building at 800 N. French Street, Wilmington, DE 19801. The first City Council Redistricting Committee/Public Hearing took place on Wednesday, August 25, 2021 at 5pm and can be watched here. For all future meetings please visit our Wilmington City Council’s “Events Calendar” here for agenda and Zoom meeting details.

All upcoming Redistricting Committee Meeting/Public Hearings will begin at 5pm on the following dates: 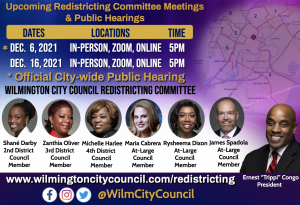 Our next Redistricting Meeting, which will be an official city-wide public hearing, will take place on Monday, December 6, 2021, at 5pm to discuss new legislative district maps that reflect how local populations have changed over the past 10 years, based on U.S. Census data. A redistricting draft ordinance will also be discussed for review and consideration by Council. For the first time, prisoners are being counted according to their last known addresses, rather than their prison address. The next step in the process will include a 1st and 2nd reading of the ordinance that will be presented on December 9, 2021, during the regular meeting of city council. Council must prepare a report by February 2022 that contains a recommended plan for adjusting the councilmanic district boundaries of districts one through eight. Members of the public can attend the redistricting meeting either online, or in-person in Council Chambers located at the Louis L. Redding City/County building. Wilmington City Council is encouraging members of the public to provide input either during public comments or by sending an email to redistricting@wilmingtonde.gov 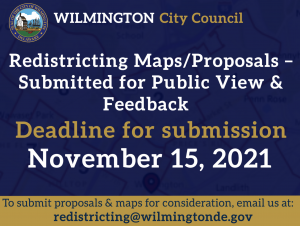 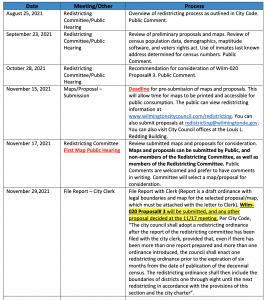 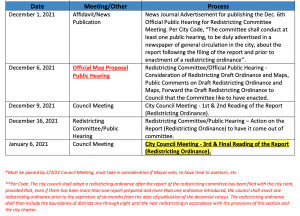 HOW TO FIND YOUR DISTRICT COUNCIL MEMBER

If you are unsure of which district you reside in, Wilmington City Council encourages you to submit your street address here in the section “Find Your District Council Member.” 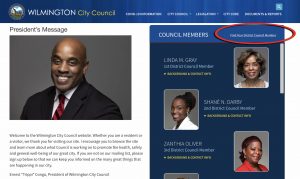