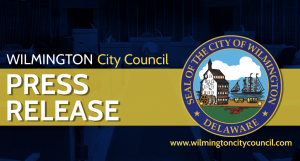 Wilmington – During their regular city council meeting on Thursday, January 20, 2022, council members presented their opinions on various matters connected to a vote of ‘No Confidence’ in the City of Wilmington’s Police Chief, Robert J. Tracy, and the Wilmington Police Department (WPD) practices.

In an effort to make positive changes in policing, while hearing community voices of those affected most by policing in Wilmington, Council Member Chris Johnson of the 7th District introduced a resolution, on behalf of City Council President Ernest “Trippi” Congo, that urges the City of Wilmington’s administration to take actionable steps, as the executive branch of government, to actively work with experts to reform the WPD, which can be read here.

The move came two days after a Special Public Safety Committee Meeting was held by City Council for the purpose of addressing Police Chief Tracy with questions and concerns by Wilmington City Council relative to various policing policy matters, that include WPD diversity, WPD community response, and monitoring crime and strategy for violence prevention to name a few.

Under the resolution, City Council recommends that the Administration engage in a national search to identify a third-party entity to conduct an audit of the WPD operations and procedures to be completed within 90 days of passage of the legislation.

Councilwoman Gray expressed her support of the resolution by stating, “I truly believe there are problems within the police department. I think we need a separate entity to come in and identify the problem areas and give us suggestions on how to improve them. I don’t think it stops with the police chief. I think the administration has not really been supportive of any changes or any transparency. Also, they haven’t given us the Citizens Complaint Review Board.”

On November 19, 2020, City Council passed Substitute 1 to Ordinance 20-034 as amended to create a Citizen Complaint Review Board that is authorized to investigate citizen complaints against law enforcement officers employed by the WPD, make reports of those investigations and to recommend practice changes, which can be read here. Although Council passed the amended ordinance, which was sponsored by Councilman Johnson, it became law without Wilmington Mayor Mike Purzycki’s signature pursuant to Section 2-202 of the Charter.

“Solutions have been presented, and there have been a number of ways that we’ve just been waiting, waiting, waiting, waiting,” said Councilwoman Harlee. “I think the biggest thing and the main thing that I hear a lot is, when is our chief going to stand up, speak up, show up, or share what is going on with the crime.”

In 2018, Mayor Purzycki and Police Chief Tracy unveiled www.CrimeMapping.com and CompStat online reports, so that citizens could have a tool to use to track crime in Wilmington and to keep the public informed. CompStat reports provides weekly, monthly and year-to-date crime data, which were presented in great details during the 2018 WPD CompStat Year End Report press conference, which can be viewed here.

For some council members, the resolution speaks to not only accountability and transparency, but also to police conduct.

“My grandmother and great-grandfather talked about police brutality. Older people in the community talk about police brutality. This is something that has been happening forever,” said Councilwoman Darby. “It’s time that we put pressure on WPD to tell them that they have to be held accountable. For me, it’s also not about an individual, too, there are systemic issues and systemic systems in play that are used to brutalizing and cause violence towards communities.”

On September 28, 2021, City Council President Congo issued a letter to Police Chief Tracy calling on his department to release any body camera footage, audio and related 911 calls surrounding an incident that occurred in a convenience store on the 500 block of New Castle Avenue where a WPD officer was caught on surveillance video slamming a man’s head against a partition while pursuing an arrest. The letter, which can be read here, has gone unanswered. The incident is under investigation by the WPD Office of Professional Standards, and the officer was placed on administrative duty pending the outcome of the investigation.

To view a list of policies and procedures that WPD adheres to, visit the link here.

“I think we also need to be battling to change the rules as they are in the legislator in terms of more transparency. There is a lot of protection and a lot of power given to police departments in our nation, and the choices that they make are life and death, and we’ve seen how some of those choices have not been good,” said At-Large Councilwoman Cabrera.

The vote of no confidence is the first for Police Chief Tracy, since he was hired on April 14, 2017, with the highest salary paid for any city employee, including previous Chiefs and Mayors.

“He gets paid $160,000 and he can’t do a press conference? I like the chief, we get along fine, this is not throwing anybody under the bus,” said Councilwoman Oliver.

President Congo also expressed frustration at the inner workings of the WPD, and believes that Chief Tracy needs to be more proactive and vocal about a plan forward, whether it’s a plan to improve community relations, increase diversity, or a plan to improve morale in his police department.

“I’ve heard numerous officers talking about the morale being extremely low,” said President Congo as he spoke about the numerous complaints he and other council members have received from sworn officers about WPD leadership in general, which has led to the urgency of the resolution.

Although Chief Tracy is ultimately responsible for every facet in the operation of the WPD, At-Large Councilman Spadola wants judges and prosecutors to be tougher on people arrested on firearm charges, saying that too many are back in neighborhoods too soon because they get freed while awaiting supervised release or post bond.

Even though there was a divide in opinions, many council members agree that the intent of the resolution was to address leadership and the longstanding complaints about WPD internal operations, which in return impacts external relationships.

“This is a vote in support of our constituents, and especially from the officers in the Wilmington Police Department who are extremely frustrated and demoralized when they don’t feel there is an opportunity to advance,” said President Congo.

To view the meeting in its entirety, visit the link here.

Council voted 7-3 (2 -absent) to pass the ordinance as amended, which can be read here.

Updates to the code include provisions for removing vehicles from private property when a vehicle has been abandoned with or without the property owner’s consent and the notice requirements that must be observed before a vehicle is removed. This Ordinance also rectifies an ambiguity created under 21 Del. C. §4402 (d) by empowering Wilmington Police officers to call for the removal of abandoned vehicles from private property.

Wilmington City Council also passed a resolution that accepts the resignation of Council Member Rysheema J. Dixon and formally certifies that a vacancy exists in an At-Large Council position, which shall be filled by appointment of a duly qualified successor in accordance with City Charter Section 2-101 and City Code Section 2-34, which can be read here.