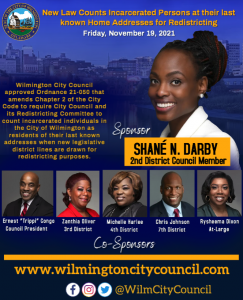 Wilmington City Council approved a new ordnance that amends Chapter 2 of the City Code to require City Council and its Redistricting Committee to count incarcerated individuals in the City of Wilmington as residents of their last known addresses when new legislative district lines are drawn for redistricting purposes.

Council voted 11-0 (2 absent) to pass the new law during their regular city council meeting on Thursday, November 18, 2021, and is now awaiting Mayor Mike Purzycki’s signature. You can read the complete Ordnance 21-050 to amend Chapter 2 of the City Code here, and you can view the meeting here.

Every ten years, local governments use new census data to redraw their district lines to reflect how local populations have changed. The City of Wilmington started the process of redistricting its eight councilmanic districts on August 25, 2021. Previously, the process counted incarcerated persons as residents of the prison location. When City Council used Census counts to draw legislative districts, they unintentionally enhanced the weight of the population in the first district that contains Plummer Community Corrections Center and the third district that contains the Howard R. Young Correctional Institution, informally known as Gander Hill Prison, at the expense of all other districts in the state. Wilmington has now corrected this problem.

“When I think about redistricting, I think of protecting vulnerable communities, protecting communities of interest, and making sure that even 10 years from now that people are going by procedures and policies that make sense and that are equitable, that are fair, that are not bias, and that doesn’t equal to buddymandering,” said Council Member Darby during her closing comments of the regular city council meeting. “I am really invested in legislation and hoping to draft more legislation of what redistricting will look like in 10 years and making that a better process for Wilmington. Because I believe that everything we do, even down to redistricting and how we draw lines, will have impact on communities for decades, for generations, and I just really think it’s important that while I’m in this seat that I take that power to say hey, I want to protect these communities and be a voice. So, I just want to say thank you again (to my council colleagues) for supporting the legislation.”