Wilmington Mayor Mike Purzycki and Police Chief Robert Tracy today announced continued progress toward accountability and transparency in City policing and community engagement through the implementation of a Body-Worn Camera program for the Wilmington Police Department (WPD). Chief Tracy said today that groups of officers will begin training for the camera program next week and then begin their next assigned shift with the cameras deployed. The Chief said this training and deployment process will continue through the month of May with full implementation expected by the first week of June.

Every member of the WPD will be assigned a body camera, including members of the command staff, officers in specialized units and those assigned to administrative functions. A body-worn camera is visible mounted on an officer’s uniform, as depicted in the photo at the end of this news release.

The City’s Administrative Board approved the department’s Body-Worn Camera Program policy on April 27. The body-worn camera policy is available online here. The policy was developed from the department’s previous pilot program, which tested equipment from various vendors, and it was shaped by national best practices adopted by law enforcement agencies across the country.

We encourage you to read the entire Body Worn Camera (BWC) policy at the link above. Among its directives are:
• Officers shall mount their BWCs on their uniform at the start of their shift in one of the departmentally approved methods and within the manufacturer’s guidelines. The BWC shall be worn for the entire shift.
• Officers will activate BWCs prior to exercising official police powers or when they believe the likelihood is great that they will need to exercise their official police powers, provided that the activation does not compromise their safety or the safety of others.
• Once the BWC has been activated by the officer, the BWC shall remain in the recording mode until the conclusion of incident or arrest.
• BWC data shall be securely stored in accordance with state records retention laws and no longer than useful for the purposes of training or for use in an investigation or prosecution.
• Unless otherwise required by law, the Chief of Police or designee is the only authority who can grant permission to release BWC recordings to anyone outside of this agency.
The WPD will continue to work with the US Department of Justice, Bureau of Justice Assistance (BJA) – the federal agency that provided grant funding for the program – as the BJA researches, evaluates, and makes recommendations throughout the implementation of the program. The City’s Human Resources and Law Departments worked with the WPD on developing the body camera policy, which has the concurrence of the Fraternal Order of Police Lodge #1.

“Policing in Wilmington continues to evolve and becomes enhanced when the City Administration and Council, the police department, and the community move forward together to improve public safety and increase community engagement,” said Mayor Purzycki. “Body worn cameras are welcomed and needed, and I applaud the Chief and his staff for embracing this technology and adding it to the array of innovative policing strategies that have come to define this outstanding department. I also extend my thanks and appreciation to City Council President Trippi Congo and all Members of Council for their long-standing support of the body-worn camera concept, and for approving needed personnel and grant funding for the program.”

“We continue to make progress towards fully implementing our department’s Body-Worn Camera program, and look forward to our officers wearing their cameras in the weeks to come,” said Chief Robert J. Tracy. “We appreciate the leadership of Mayor Purzycki, the support of our federal and state partners, and the efforts of our team to ensure this important program is fully implemented.” 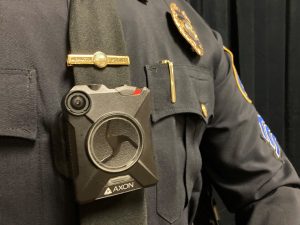