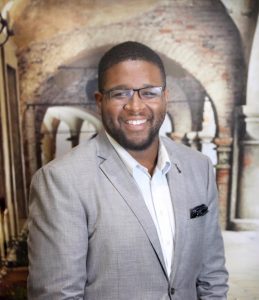 Wilmington City Council Members and staff would like to congratulate our City Council Chief of Staff, Daniel Walker, for being honored as part of this year’s Delaware Business Times (DBT) class of 40 under 40.

The DBT40 Awards pays tribute to ambitious professionals who are making a name for themselves through professional excellence and community involvement. The honorees represent the best in a wide range of fields such as finance, law, non-profit, hospitality, education, technology, and government.

Daniel Walker is the current Chief of Staff for Wilmington City Council where he is the chief legislative advisor to Council Members, oversees Council staff inclusive of WITN Channel 22, and handles an array of major projects. With each project assignment, he encourages a team approach, thinks creatively, behaves honorably, and represents himself and City Council with the utmost integrity and dignity.

Daniel is no stranger to the political scene. Before coming to Wilmington City Council, Daniel got his start in politics as an intern during Senator Coons’ 2014 reelection campaign. He also served in a variety of roles as the Special Assistant for Congresswoman Lisa Blunt Rochester’s congressional campaign leading the team’s community engagement and voter contact efforts. Daniel also worked for the Delaware General Assembly Majority Caucus as a legislative aide assigned to the Vice-Chair of the Education Committee and Chair of the Labor Committee. He served as the founding Chair of the Delaware Young Democrats before being elected as Vice-President in 2017.

Prior to being appointed as Wilmington City Council’s Chief of Staff, Daniel served as the former Executive Director for the Delaware Campaign for Achievement Now (CAN). DelawareCAN launched in January 2017 and is part of the national 50-State Campaign for Achievement Now and works to collaborate, empower, and mobilize everyday Delawareans to advocate for a high-quality education system for all students. He has also served as an advisory board member for various nonprofits including the Newark Jaycees (JCI), and as a board member for Planned Parenthood of Delaware and the Rock Manor Corporation. He holds a BA in political science from the University of Delaware and also holds an MSM with a concentration in public administration from Wilmington University.

The DBT40 Awards ceremony will take place on October 7, 2021, and is customarily a sell-out event where more than 250 local executives and guests will gather to celebrate and honor Delaware’s top business leaders under 40 who have successfully taken their companies to the forefront of their chosen industries and given back to the community. Honorees will be profiled in the October 5, 2021 issue of the Delaware Business Times.